I would like to counter all the accolades with a dose of reality.

Shame on Anne Rota for recommending a report for adoption that omits compliance with provincial legislation.

Rota’s Report referenced under-utilized parking for employees but plans to continue offering those spots. However, the alleged under-utilized accessible parking in the King’s Navy Yard Park lot will be reduced. The rationale for this differentiation was unclear, until the council meeting when Ms. Rota stated this reduction would allow for a turn around to be created instead. Further, the plan is to add three accessible parking spaces in three locations at the outside perimeter.

Shame on council for approving a plan that fails to meet its obligation to consult with the public.

Mayor DiCarlo advised, in April 2021, the Amherstburg Accessibility Advisory Committee was not consulted with respect to Open Air Weekends and only one person with a disability was consulted in the design of the footprint.

It is mandatory, pursuant to O. Reg. 191/11: Integrated Accessibility Standards for the town to consult on the need, location and design of accessible on-street parking spaces and shall do so with the public and persons with disabilities as well as its Accessibility Advisory Committee.

My submission to members of council, prior to the council meeting, wherein I asked if the town would discriminate against persons with disabilities, quoted the provincial legislation regarding public consultation, and objected to the arbitrary placement of accessible parking spaces, especially in a distant perimeter, and accessible spaces that cannot be accessed due to road closures, was ignored.

Given council’s duty to represent the public and to consider the well-being and interests of the municipality, I must question the $90,000. taxpayer funded expenditure that creates barriers to persons with disabilities.

Commentary by Linda Saxon as published in the River Town Times December 1, 2021

All members of council were asked, How necessary is it to block access to the post office during the open air weekends? Isn’t the post office an essential service as opposed to a retail establishment? It’s especially important for use by persons with disabilities; I’m not sure if you considered that, seeing as only one person with a disability was consulted.

Only Councillor Marc Renaud responded: I have been downtown for most open air weekends. There is unblocked access to Canada post parking at Precision Jewellers.

Follow up comments with further questions: You must have not witnessed an enthusiastic crossing guard on Friday afternoon stopping traffic from travelling west of Ramsay Street to park in front of the post office or the jewelry store. You also might not have seen an irate driver squeal his tires as he left the area after she stopped him.

Your personal anecdote offers little to address a very important issue regarding the controversial open air weekends. Given that the mayor confirmed only one person with a disability was consulted, i’m not assured that accessibility is a priority.

Perhaps you could explain why accessibility features, now being considered in this evening’s report, were not included at the time of procurement and renovations for the community hub? Did the AAAC inspect the site plans? With regard to spending taxpayer dollars, the tenants are equally liable for half the accessibility expenditures so why are taxpayers being asked to pay their share?

No one responded to date.

This week’s River Town Times article on a new Open Air survey reports that this year traffic is blocked off on Richmond Street from Ramsay to Dalhousie Street. Therefore, access to Canada Post is blocked.

The report for council’s September 24 meeting is not a status update; it is a request, 3 months in advance of the compliance deadline, for an extension to 15 months from now.

COVID-19/the pandemic is the most obvious reason for the recommendation and it is referenced nine times in the report:

RISK ANALYSIS did not acknowledge the historical disadvantage of persons with disabilities. While the report mentioned administration will continue in its efforts to comply, the risk was relative to hypothetical consequences to the town: If non-compliant; can require; If this is the case; suggests that it cannot comply; may still enforce its timelines; there may be financial implications.

FINANCIAL MATTERS did not specify a dollar amount of hardship, given the reliance on how “COVID-19 has impacted the finances and other resources of the municipality.” Instead, it was noted the town might face financial implications in the form of administrative penalties or increased expenses in trying to meet the required standards after an order to comply. There was no mention of the AODA procedure relative to an Order.

CONSULTATIONS listed three staff; there was no mention of public consultations of ratepayers that pay for the town’s website or their thoughts on financial priorities for the community.

Council voted in favour of the resolution.

In a Report to Council by Kevin Fox for the September 14, 2020 council meeting, Administration recommends that Council request that the Province of Ontario extend the compliance deadline from January 1, 2021 to at least January 1, 2022 due to the impacts of the pandemic (COVID-19) emergency and the impacts it has had both on the finances and resources of municipalities such as the Town of Amherstburg.

And town council voted in favour.

COVID-19 has only existed for the past several months compared to provincial legislation that was enacted in 2005: the AODA (Accessibility for Ontarians with Disabilities Act). Provincial Standards included deadlines for compliance but, suddenly, in September 2020, the town needs more time? 15 months more time?

Windsor Police held its ‘Coffee With A Cop’ on June 27 at the Caffeine & Co., housed in an inaccessible building in Amherstburg, Ontario. 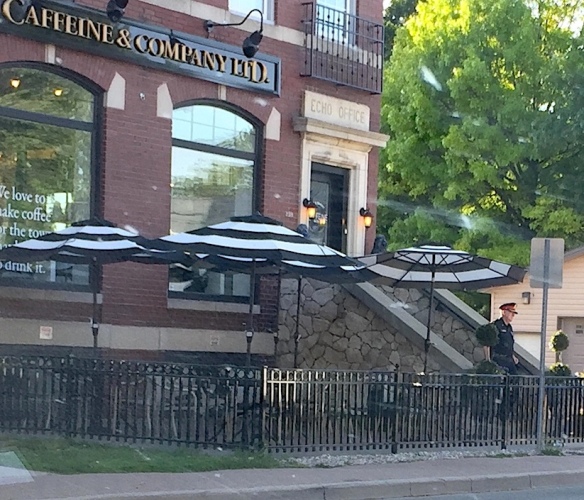 Windsor, as a Proponent to the Amherstburg RFP Police Services, was informed in section 33, ACCESSIBILITY FOR ONTARIANS WITH DISABILITIES ACT (AODA), that it shall ensure that all its employees receive training regarding the provision of goods and services to per sons with disabilities in accordance with the AODA.

7.(1) Every obligated organization shall ensure that training is provided on the requirements of the accessibility standards referred to in this Regulation and on the Human Rights Code as it pertains to persons with disabilities.

The Windsor Police Service endeavours to be a professional, effective and accountable law enforcement organization that upholds the human rights and dignity of all people in accordance with the Ontario Human Rights Code. The Windsor Police Service is committed to playing its part in making Windsor a community where everyone lives, works and visits in a safe, comfortable and inclusive environment.

The inclusion of human rights themes through all WPS training and the requirement to monitor training programs to ensure that human rights issues are being addressed on an ongoing basis, will assist WPS members to provide services to the public without discrimination.

As a long time accessibility advocate, I asked Windsor Police for an explanation and received the following:

“My name is Jason Bellaire and I am the Inspector in charge of our uniform patrol officers at the Windsor Police Service (WPS). I was not at the “Coffee with a Cop” event last night (due to a prior commitment); however, I am somewhat familiar with the location where the event was held. This appears to be a regretful oversight on our part as co-organizers of the event. Please accept my apology on behalf of WPS and I assure you that better consideration regarding accessibility will be given when planning future events.

We genuinely appreciate your bringing this issue to our attention and we always welcome any critical feedback from our community members, partners and stakeholders. Once again, please accept our apologies for this misstep and always feel free to contact us with any concerns. Have a safe and happy summer.”

As much as I appreciate the apology, after the fact, I would rather this type of incident not occur in the first place.

Copyright Policy: please do not use or copy any of my material without my permission. thank you for respecting my intellectual property.